Building upon our innovative approaches to teaching and practicing Public History, the History Department is proud to present an exceptional project called Museum on the Move.

History graduate students outfit a vintage Airstream trailer with an interpretive exhibit that hits the road to take history directly out of the classroom and to the public. 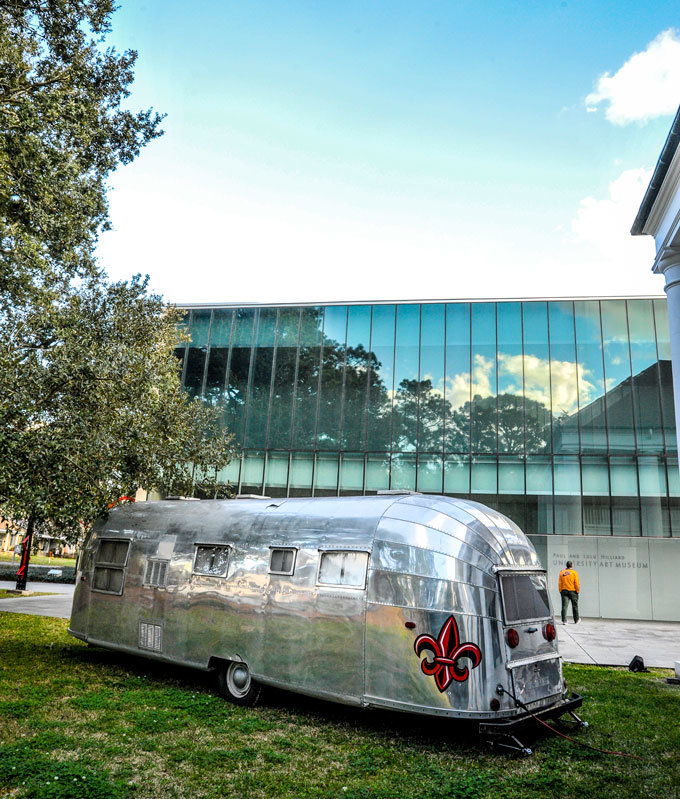 Exhibits are created on a rotating basis and require the melding of two courses and a cohort of students. The first course is a traditional history course where students conduct research projects geared toward the planned exhibit. The next phase of the project is for a Museum Studies course where students re-craft the research done in the first class to create exhibit components that they will install in the trailer.
In the end, it is our intent for the program to teach students the methods and value of creative approaches to practicing history and to establish a recognizable product in the form of rotating exhibit topics in a compelling package. (picture inside trailer)

-The first exhibit, "Crossing the Line: Louisiana Women in a Century of Change" debuted in December 2013 and coincided with the publication of Louisiana Women: Their Lives and Times, v. 2 (University of Georgia Press) being co-edited by the department’s own Dr. Mary Farmer-Kaiser.

The exhibit was designed in Dr. John Troutman's museum class.

-Our second exhibit is entitled "Drill, Baby, Drill? Oil in Louisiana" and was launched in February 2016. In the spring of 2015, students in Dr. Chad Parker’s “History of Oil” course surveyed archives and secondary sources.  That fall, our public history graduate students developed, wrote script, collected objects and images, designed, and installed “‘Drill Baby, Drill’? Oil in Louisiana.” Relying upon oil histories from the oil field and the latest research on the impact of the oil industry in Louisiana, the students crafted a beautifully personal exhibit that engages both the contributions of the industry to Louisianaʻs economy, as well as the environmental costs that the state has endured in consequence.  Students will travel the exhibit throughout the state over the next year as they visit schools, civic meetings, music festivals, and more.

-The third and current exhibit, "Unmasking Tradition: Mardi Gras in Louisiana" opened in May 2018. In a course taught by Dr. Jacqueline Beatty and Dr. Chad Parker, students looked to explore various traditions of Mardi Gras in New Orleans and in the countryside. The exhibit celebrates a number of Louisiana traditions, but also asks visitors to question the origins of those traditions and their meanings.