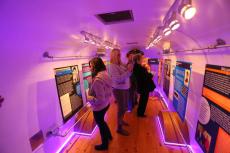 Read more from our students and faculty on the history blog! Learn about their projects, research, and reviews.

The Department of History offers introductory courses such as:

Other 300 level courses focus on :

Below are listed the course offerings for History.

102.  World Civilizations II. (3, 0, 3). Survey of the social, cultural, political and economic patterns of change in world societies from 1600 to the present.

221.  The United States to 1877. (3, 0, 3). Surveys the development of ethnic and cultural diversity in America, the establishment of national political and economic institutions, the early development of American ideals and traditions, and the formation of an expansionistic foreign policy.

307.  History of Louisiana. (3, 0, 3). From early exploration and settlement to the present. Prereq:  Any other History course.

311.  Ancient World. (3, 0, 3).  Content varies. May be repeated twice for credit. Examines the modern world's debts to ancient civilizations, focusing on religion, art and literature, science and technology, politics and warfare.

312.  The Medieval World, 300-1300. (3, 0, 3).  The development of European society and culture following the collapse of the Roman Empire with emphasis on the synthesis of classical and Christian traditions, the establishment of feudal kingdoms, the rise of Western institutions and arts, European contacts with Byzanthium, Islam, and the world beyond the West.

313.  Origins of Modern Europe, 1300-1600. (3, 0, 3).  The global transformation of Europe focusing on the waning of medieval culture, the European Renaissance, the Protestant and Catholic Reformations, the Scientific Revolution, and the causes and consequences of European overseas exploration and expansion.

315.  Early Modern Europe, 1600-1815. (3, 0, 3).  Explores European societies from the time of absolute monarchies through the creation of the foundations of modern political systems.  Examines the evolution of European states through such formative events as the Enlightenment, the creation of constitutional monarchies, the French Revolution and the impact of Napoleon.

316.  European Supremacy, 1815-1914. (3, 0, 3).  Explores Europe’s supremacy in the century before the catastrophe of World War One, focusing on nation building and ideological confrontations, industrialization and the global economy, and the causes and legacy of European imperialism.

317.  The Collapse of Europe, 1914-1945. (3, 0, 3).  Explores this century’s most important events:  World War One, the Russian Revolution, the decline of democracy and the rise of dictators, World War Two and the dawn of the nuclear age, and the origins of the Cold War.

318.  Europe Divided and Reconstructed, 1945-present. (3, 0, 3).  Explores Europe’s international role in the aftermath of World War Two, the uncertainties and tensions engendered by the Cold War, the Common Market and the West European revival, and the possibilities and problems created by the demise of Soviet communism.

321.  English History I. (3, 0, 3). An exploration of the peoples and cultures that shaped the development of England from prehistory until the Restoration of the Stuart kings.

322.  English History II. (3, 0, 3). Explores the growth of England from a medieval society to a modern state, from an island culture to a worldwide empire, from constitutional to parliamentary democracy.  Topics include industrialization, imperialism and decolonization, the welfare state, and the “new Europe”.

325. Indigenous Peoples. (3, 0, 3). Content varies. May be repeated twice for credit. Histories of indigenous peoples in the Western Hemisphere and Pacific Rim.

327.  Modern European. (3, 0, 3).  Content varies. May be repeated twice for credit. Examines European peoples and their development with focus on social, economic and political movements.

330.  Modern African Nations. (3, 0, 3).  Content varies. May be repeated for a maximum of six hours credit. Examines African peoples and their development with focus on social, economic and poliltical movements.

331.  Colonial and Revolutionary America. (3, 0, 3 ).  Native American and European backgrounds, establishments of European settlements and institutions, emergence of colonial culture, conflict between France and England for America, the movement for independence in colonial British North America, the War for Independence and the development of state and national constitutional republicanism.  Formerly HIST 373.

332.  The Young Republic, 1787-1848. (3, 0, 3).  Explores the early American republic with emphasis on the U. S. Constitution, the Bill of Rights, the administrations of presidents from Washington to Polk, slavery, the Mexican War, and the causes of Civil War.  HIST 374.

333.  Civil War and Reconstruction. (3, 0, 3).  Background and causes of the American Civil War, military, political, and social history of the Union and the Confederacy during the war; state and national problems during Reconstruction.  Formerly HIST 375.

334.  The Rise of American Power, 1875-1917. (3, 0, 3).  Examines the emergence and development of an urban and industrial United States with emphasis on conflicts between traditional values and modernization, overseas imperialism, and the problems of world power.

336.  Contemporary America, 1945-Present. (3, 0, 3).  Explores the political, social, and economic forces driving the United States from World War II to the present.  Emphasis on origins and collapse of the Cold War, the Civil Rights Movement, the Sexual Revolution, the Great Society, Vietnam, Watergate, the Reagan Revolution and beyond.  Formerly HIST 377.

343.  Modern Asian Nations. (3, 0, 3). Examines individual Asian nations and their development through an in-depth focus on social, economic, and political movements.  Content varies. Students are limited to a maximum of six hours credit.

352.  Latin America Since 1824. (3, 0, 3). The study of nations which seceded from European empires in the 19th and 20th centuries.  Examines especially cultural values and structures from the colonial period, continuing patterns of authoritarianism, and the struggle to establish democratic institutions.

355.  Black History. (3, 0, 3). A survey of the black experience from the African background to the present, with emphasis on the creativity and innovativeness of Afro-Americans in adjusting to and profoundly influencing American life.

361. Business and Economic History. (3, 0, 3). Content varies. May be repeated twice for credtt. History of business and the economy with special emphasis on industrial development and markets.

363.  History of Ideas. (3, 0, 3).  Analysis of basic beliefs about religion, humankind, nature, and society in their historical development .  Content varies.  Alternate subtitles will appear on students’ transcripts.  May be repeated for credit to a  maximum of six hours.

366.  Gender in History. (3, 0, 3).  Content varies. May be repeated twice for credit. Explores the role of gender in different historical and cultural settings.

367.  Social and Cultural History. (3, 0, 3).  Content varies.  Alternative subtitles will appear on students’ transcripts.  May be repeated for credit to a maximum of six hours.  Historical perspectives on social and cultural change over time.

368.  History of Religion. (3, 0, 3).  Content varies.  Alternative subtitles will appear on students’ transcripts.  May be repeated for credit to a maximum of six hours.  Examines historical perspectives on the religious experience in various areas of the world.

369.  Constitutional and Legal History. (3, 0, 3).  Content varies.  Alternative subtitles will appear on students’ transcripts.  May be repeated for credit to a maximum of six hours.  Examines the historical origins of constitutional development and legal practices in various areas of the world.

371.  Topics and Themes. (3, 0, 3). Content varies.  Alternate subtitles will appear on students’ transcripts.  Students are limited to a maximum of six hours credit.

378.  The American South. (3, 0, 3).  Evolution of the sense of southern regional identity and cultural distinctiveness in reality and myths from colonial times to the present.  Focusing on the impact of racism, plantation slavery, Civil War and Reconstruction, and the economic and cultural revolutions of the 20th-Century.

379.  The American West. (3, 0, 3).  Effects of the “moving frontier” experience upon American development, with emphasis on the people and the land, development of Trans-Mississippi West during the 19th century, American Indian, territorial expansion, sectional conflict, and economic  development.

380.  The Modern African-American Experience. (3, 0, 3).  The African-American community in the U.S. since 1945.  Includes the Civil Rights Movement, the influence of the third world experience, and the reemergence of Pan-Africanism in America.

381.  Wars and Revolutions. (3, 0, 3).  Comparative exploration with emphasis on causes and effects.  Includes theories of revolution, role of political repression, war as catalyst of social change, and the role of subcultures and countercultures.  Content varies.  May be repeated twice for credit.

384.  Science and Society. (3, 0, 3).  Explores methods and values in the scientific endeavor and the impact of scientific developments on attitudes, behavior, religion, industry and agriculture, public policies, urban life and the environment. Content varies. May be repeated twice for credit.

To enroll in any 400-level course, students must be admitted to the Upper Division.

452(G). Historical Resource Administration and Interpretation.  (3, 0, 3).  May be repeated for credit. Content varies.  Alternative subtitles will appear on students’ transcripts.  Examines the role of historical methodology in interpreting history in public frameworks, including museums, historic preservation, archives, and communities.

490.  Historical Research and Writing Seminar.  (3, 0, 3).  Introduces the methods and techniques of historical investigation and reporting.  Restr:  Juniors and seniors only.  Formerly HIST 390.